How to Look After Your Group’s Money

Advantages of Having a Dedicated Workspace in a Co-Working Environment

Marketing for Startups During Recession Time

Have you set your eyes on making it big in the business of eCommerce? Let’s state the obvious – it isn’t easy. For every successful online store that you know of, there are hundreds of others that have failed.

While it seems all glitz from the outside, eCommerce is one of the most competitive businesses, and breaking even and making profits is tougher than you think. Just count the number of small online stores you have shopped from and have since closed down; you’d know what we are exactly talking about.

Why do eCommerce Startups fail? There are various reasons – first, stores fail to differentiate themselves from the competition, and in a market where ‘first-mover’ advantage counts, there is little for the ‘also ran.’ Second and more importantly, they lack the vision to scale up and be counted.

The very minimum you need as a budding eCommerce entrepreneur is some handholding from an expert who has skin in the game and can prepare you for the challenges. Such mentorship is hard to find!

There are two sets of people who can mentor you in this trade – the ones who have aced this game and built successful stores or those who have failed. It can be hard to find the first category of people to mentor you. You can’t expect to see Jeff Bezos share secrets of Amazon’s success and why it remains the undisputed Big Daddy in the game. 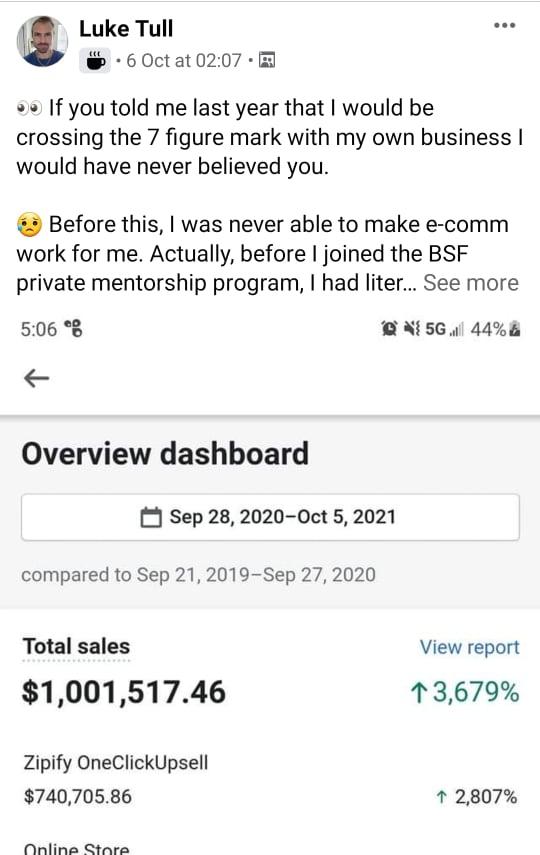 Learning from failed entrepreneurs may come easy, and you can surely learn from their mistakes and not repeat them. But the same people don’t either have the success recipe to share!

It’s not all doom and gloom as it sounds, as Justin Woll is just the person you need as your mentor to be ahead of the game. There are very few in this game who have the same experience, understanding of the nuances of eCommerce as Justin does. He just doesn’t train his students; he helps them build successful eCommerce stores.

As an eCommerce mentor, he is passionate about helping young entrepreneurs build successful online stores from scratch and, more importantly, scale their business to stay ahead of the competition. His big and growing fan following on Facebook and Instagram are testimony to the popularity he enjoys among eCommerce Startups. Over the past few years, he has helped hundreds of students realize their dream of making it big in the eCommerce business.

Who is Justin Woll?
He is the person behind the  Beyond Six Figures Facebook Group and trains the next generation of eCommerce entrepreneurs. Justin isn’t the eCommerce mentor you listen to on YouTube who talks about the same old strategies and ideas that you have heard time and again. He has been actively involved in the journey of his students, helping them scale their stores. You’d come across stories of his students clocking up to $10,000 per day in sales.

There is a story of the man behind this successful Facebook Group. He isn’t the typical ‘online guru’ giving out his sermons but someone who has built successful eCommerce stores from scratch and has done it several times. As a young student at Rutgers University, he made $200,000 within a year of starting his entrepreneurial career.

This was no accident as he has repeated the same success time and again with different products and targeting different markets. Along with hard work and strong technical know-how, Justin cracked the eCommerce code understanding the needs of his target customers and delivering it to them. By his 25th birthday turned a millionaire. Not bad for someone who had seen his family lose all its fortunes as a child.

Few people in the game of eCommerce mentorship can pride themselves on having more than a decade of experience in eCommerce. He has seen the business evolve from the time the hesitant customers were making their first purchases on the Internet. This level of experience and market insights is hard to beat. If you are looking to learn the ropes in this competitive industry, you can’t surely find a better name than Justin Woll.

What Is Beyond Six Figures All About?
Justin Woll didn’t chase his next millions after the early success and rather opted for the route of mentoring the next generation of eCommerce entrepreneurs. His second student hit the $10,000 per day sales within a few months, and there was no looking back since Justin found his calling in training students and taking their businesses from $0 to $100,000, hence the name of his Facebook group. He has been sharing his methods with students from across the globe.

No Time to Waste, Just Learn Proven Systems
If you have spent time watching eCommerce tutorials on YouTube or attended one of those webinars, you’d be aware of their commonality – most of them talk things you already know and overwhelm you with theories and jargon. Justin Woll keeps it simple – if you need to build a successful eCommerce business, you must manage it successfully!

His courses focus on hands-on training instead of theories and jargon. There is no easy route to success in this business, but successful online store owners create the perfect blend of hard work and the right strategies.

Success Stories Galore…
Ecommerce mentorship programs can be tricky as there are hundreds of ‘self-styled mentors’ running their training programs. Most haven’t built or managed an online store in their lives and rather deal with case studies. While unsuspecting eCommerce entrepreneurs sign up for these courses, nothing is said or written about them in the future.

Justin Woll is different as his former students are the biggest testimony of his success as a mentor. They share their success stories for others to see. These aren’t the paid testimonials you come across for the self-styled eCommerce gurus but real facts and figures where students mentored by Justin have built stores from scratch and earned their six figures as they aim for more.

Beyond Six Figures 6 & 12 Month Mastermind Experience
Rome wasn’t built in a day, and neither would your eCommerce store. Though the short-term training courses do help you build clarity of ideas and vision for your online store, the Beyond Six Figures 6 & 12 Month Mastermind Experience goes beyond that. Students who write about their success stories with Justin Woll’s courses have taken this program.

It isn’t a one-off lecture or an overview of how to build and run an eCommerce store but one that has Justin taking you through the paces. He would hand-hold you, nurture your ideas and help you build the six-figure store you have always dreamed about.

What Does the Course Include?
This is the best eCommerce course you would come across and one that has been curated by Justin Woll to address the challenges that young eCommerce entrepreneurs face. Here are some of the highlights of this program.

You won’t have to part with a fortune as BSF has priced this course which is priced just competitively! If you thought that’s all, Justin and his team would surely surprise you as the 12-Month Mastermind Experience comes with lots of bonus freebies.

Bonus #3
The Automatic & Manual Bidding Bootcamp offers deep insights into eCommerce bidding and scales up stores on platforms such as Shopify.

Bonus #4
Big Bang Method, the most effective scaling method that every eCommerce entrepreneur must know to generate traffic and convert them into sales.

Bonus #5
Influencer Marketing Bootcamp, where you learn strategies to use influencer marketing in the right manner and leverage this strategy to get a stronger foothold in the market.

Bonus #6
Email Marketing Bootcamp that takes you through the best strategies of email marketing. Justin teaches his students the secrets of improving email interactions and sales.

To sum up, there is more to BeyondSixFigures than your typical eCommerce training program. Justin Woll introduces you to proven methods of building and running a successful eCommerce business and dealing with all the changes that come along.

It is surely a worthy investment that any eCommerce entrepreneur can make. Apart from the knowledge and the training, it is the sheer track record of Justin’s training that sets him apart. He has helped hundreds of students cross the six-figure threshold, and you can be on the list next.

Head Honcho, Editor in Chief and writer here on VENTS. I don't like walking on the beach, but I love playing the guitar and geeking out about music. I am also a movie maniac and 6 hours sleeper.
@rjfrometa
Previous Los Angeles Artist “2013keezy” Is Drops “Don’t Need That”
Next Tips for Gaming While Traveling

Become The Industry’s Best With The Best Digital Marketing Agency