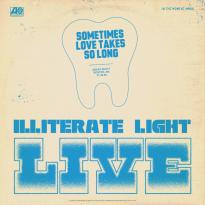 Indie folk-rock duo Illiterate Light has released a live version of “Sometimes Love Takes So Long,” recorded during a sold-out show at Allston’s Great Scott + accompanied by an electrifying and intimate performance visual – WATCH HERE. The recording was long planned as the fourth installment in the band’s live series “In The Moment,” which the band has been building out with recordings and videos from their incredible live shows.

What was unplanned, however, is that the release now comes just days after Great Scott’s owners announced the venue will sadly not be re-opening its doors. In that way, the video now serves as a fitting homage to the historic club. In fact, the series as a whole has taken on new meaning over the last couple of months – becoming a tribute to the power of live performances and the community formed during the duo’s live shows.

The band shared the following about today’s release and their memories of playing at the venue:

We always end up skating in Boston. I’m not sure why. Before the Great Scott show in January we wandered down to the Orchard, a legendary skate-shop with an indoor bowl. It was cold as hell outside and we’d been stuck in the van from New York for a few hours. We cued up the soundtrack to Tony Hawk 1 and went bananas. After amateur hour in the bowl (let’s be honest) we made our way back to Great Scott, thankful that no one pulled a hammy. We knew it was gonna be a wild night as the show had been sold out for weeks.

We’ve known for months that we’d be releasing “Sometimes Love Takes So Long” live in Boston at Great Scott. What we didn’t know was that, in the midst of the Coronavirus, Great Scott would announce that after 44 years of business, it would not reopen after the pandemic. It was a legendary spot for so many touring artists (including us), and it will be sorely missed. We hope this performance, a blip on the screen, captures the spirit of the Bostonians that called Great Scott their musical home. Thanks for singing along, ya’ll.

Head Honcho, Editor in Chief and writer here on VENTS. I don't like walking on the beach, but I love playing the guitar and geeking out about music. I am also a movie maniac and 6 hours sleeper.
@rjfrometa
Previous What are APK files and their benefits?
Next JOSIE DUNNE UNVEILS LATE TEENS/EARLY TWENTIES EP