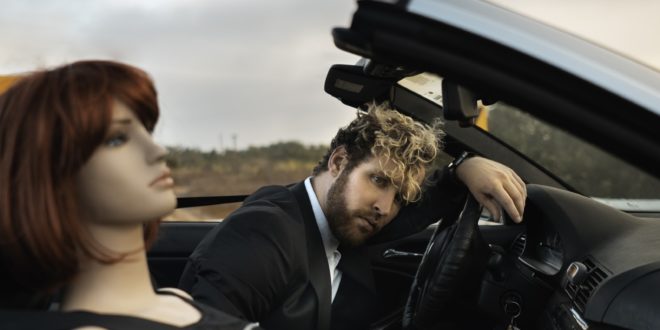 Songwriter/producer Mr. Popular today releases his debut album, Flair For The Dramatic, out via Big Noise. The title is itself a mission statement for Mr. Popular. It’s the L.A-based artist’s quest for creative originality while taking “drama” to be both the emotional content of his songs, as well as the desired physical effect. These are songs of shared trials, and these are songs to make you dance.

The album is bound together by reflection on a specific past relationship, one “where I’m still not exactly sure why it ended – but I know that it was my fault.” The record might tackle heartache and failure, but it doesn’t do it at the expense of a good bop. Flair For The Dramatic delivers a master class in earworm melodies and vibes you’ll feel deep down; from the smoky yearn of album-opener, “Burn”, through the irrepressible pop bounce of lead-off single “Nowhere To Hide”, to four-to-the-floor stomp of the album-closing “Looking For A Star”.

Mr. Popular is the culmination of a journey for Davis that began behind-the-scenes as the ghost-producer Mr. Pop. In 2018 he broke above ground, as the paper-bag-masked Mr. Popular, with a series of singles that followed his muse through EDM, hip-hop, indie, and beyond. This self-described genre mash of “ADHD pop” swiftly caught love from Spotify’s editorial team, featuring on New Music Friday and ultimately rising to #3 on both the U.S. and Global Viral 50 charts.

Mr. Pop describes how the bag served as a tool that allowed him to explore soundscapes without expectation, “The bag was a simple way for me to conceal my identity so I could freely create without any boundaries or expectations. There was no history attached to the bag and I could become anything I wanted, figuratively and literally.” Flair For The Dramatic is a bold and honest unveiling in which Davis has, literally, removed the mask. These seven tracks find Mr. Popular un-obscured, wholly himself, and striking forward with a tightly cohesive collection of glistening, irrepressibly catchy, pop songs.

Mr. Pop hopes that, while the Flair For The Dramatic is designed to be at home on a dancefloor, it also offers listeners some emotional support. He says, “If you’ve been through any rough patches relationally, this album should meet you right where you’re at. I hope you identify and resonate with my stories in a way that makes you feel understood. You are not alone.”

Head Honcho, Editor in Chief and writer here on VENTS. I don't like walking on the beach, but I love playing the guitar and geeking out about music. I am also a movie maniac and 6 hours sleeper.
@rjfrometa
Previous CHARLI XCX PARTIES IN AN ALTERNATE DIMENSION IN THE VIDEO FOR ‘CLAWS’
Next What To Binge This Weekend: ‘Gourmet Makes’ and “It’s Alive’