Filters vs Facets: Everything You Need to Know

Interview with Gatlopp: Hell of a Game composer, Kenny Wood

Elissa Scott, the T Lady: Breaking Into the Health Industry With Natural Products

I want to start this by saying I think Teen Titans Go! is a really good, really funny show. I also want to note that I understand criticism isn’t always easy to deal with. With that out of the way, I have some massive disappointment in a fun, silly show I really like to share.

Recently I caught up on the Teen Titans Go! episodes on my streaming service. A couple of them were good. Nothing great but solid comedy. Then, I watched “Teen Titans Roar.” According to Wikipedia, it hasn’t aired on TV yet. I’ve seen it, though, and I was really put off by it. The episode is written by Michael Jelenic, one of the showrunners of the program. He is a successful and talented writer. He’s also apparently weirdly bitter and has issues with accepting criticism.

In the episode, the Teen Titans, save for Starfire, are excited for the reboot of their favorite cartoon Thundercats. When they watch it, they find out that they’ve turned it into a wacky comedy where the characters have bean-shaped mouths. They are so infuriated they start a petition to get the show cancelled. Naturally, it fails. Then they transport to the world of Thundercats and get beaten up.

There’s some funny stuff. There usually is in Teen Titans Go!. It’s a funny show! This is also an entirely meta episode about the show itself. If you aren’t familiar, Teen Titans Go! is a cartoony, comedic reboot of Teen Titans. I don’t like that show or care about it. I think the animation is mediocre and I have no interest in serious cartoons. A lot of people loved it, and so when Teen Titans Go! came around they got mad and made a bunch of complaints.

Teen Titans Go! has been poking fun at that reaction for years. Mostly I’m amused by it. It is ridiculous to be mad at a show for existing, unless there is a moral issue with it. Teen Titans still exist. You don’t have to watch Teen Titans Go!. It’s fine if you don’t like it. It’s weird to be mad about it. The original cartoon is not sacred. Different versions of Beast Boy are allowed to exist. 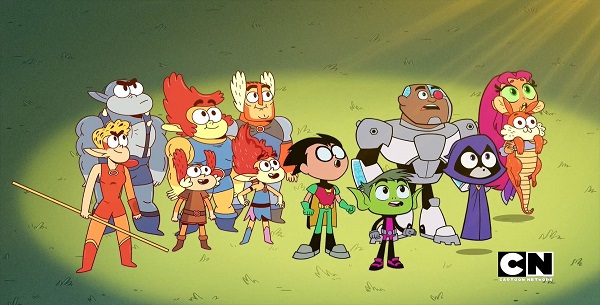 However, “Teen Titans Roar” is just so petty. It’s mean spirited and kind of cruel. They aren’t just poking fun at people who don’t like the show. They are vicious about it. They portray the people signing the petition in that oh-so-clever and original way of making them “gross” dudes. Which is kind of shaming of people’s appearance in a way, but they are also just being mean. One of the guys is literally on leash barking like a dog. There are also some unkind lines. Starfire says something along the lines of calling the people who don’t like the Thundercats reboot, and therefore the Teen Titans Go! reboot, as being extremely entitled and having nothing going on in their lives. Something like that. I do not remember exactly. I just remember being irritated by how harsh it was.

There’s something to be said about taking the high road and not punching down. Michael Jelenic, dude, you have a TV show. It’s in its sixth season. You’ve made over 275 episodes. You have a ton of fans. People love your show. Yes, some people also hate it. Some of them hate it for a silly reason. Some of them are surely dicks about it. You’re a grown man. Criticism is part of the job. Sinking to the level of your detractors, and doing it on your TV show, just makes you look sad and petty. This was a total misstep.

I will keep watching Teen Titans Go! of course. It’s a really funny show. However, this episode will always leave a bitter taste in my mouth. If somebody has a different idea of what to do with some characters you like, there’s no need to freak out about it. On the other hand, if you have a successful TV show and are in a medium where criticism is a known part of the job, dedicating an entire episode to cruelly dunking on strangers is just as pathetic in its own way. I just hope not to see something like “Teen Titans Roar” again.

Internet gadabout
@ChrisXMorgan
Previous The Best Sitcom Ensemble Of The 1980s
Next The Vents Question Of The Week: Worst Best Picture Winner