It’s almost St. Patrick’s Day. March 17 is coming up on next Tuesday, and you may be celebrating this weekend. That’s because, traditionally speaking, people celebrate St. Patrick’s Day by drinking, and not everybody wants to get blitzed on a Tuesday. However, to me, St. Patrick’s Day is an excuse not to drink, but to write about a classic episode of The Simpsons. It is, to my knowledge, one of the only sitcom episodes overtly about St. Patrick’s Day. Sure, there are others, but it’s the classic one in my mind.

The episode is “Homer vs. the 18th Amendment,” and you already probably know what I’m talking about. That, or you don’t know The Simpsons. This is the Beer Baron episode. The Rex Banner episode. It’s an all-time time true classic episode of the greatest show ever.

We begin with St. Patrick’s Day, where everybody in Springfield is celebrating by getting drunk. Then, the fun ends with Bart accidentally gets drunk due to a funnel mishap. Suddenly, anti-alcohol forces are out and about, and it turns out there is a prohibition law on the books in Springfield. That brings prohibition to town, which eventually brings the no-nonsense lawman Rex Banner, a parody of Elliot Ness, but from the TV show The Untouchables where he’s played by Robert Stack. It’s actually Homer who is able to operate under Banner’s nose as the Beer Baron, the man who is flooding speakeasies around town with alcohol. First it’s just beer he stole, then he starts making bathtub liquors. 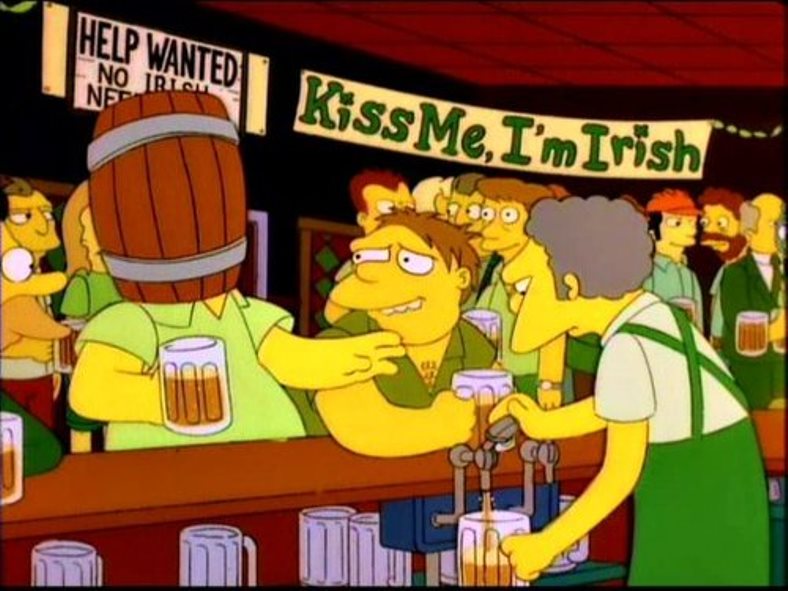 Eventually, it turns out that the prohibition law had been repealed decades prior, so everything going back to normal, especially after Rex Banner is catapulted out of town. Finally, the episode ends once the town has been replenished with booze and Homer says one of the most-famous quotes in Simpsons history: “To alcohol! The cause of, and solution to, all of life’s problems!”

That’s the line people took from this episode, running with it on occasions like St. Patrick’s Day. However, it’s one of many great lines and moments. Homer’s whole plan is delightful. Rex Banner is a fantastic one-episode character. There’s also a great moment in Moe’s speakeasy, which is a pet shop on its surface to hide the illicit activities, where Barney gets caught up in a bunch of gears. I could just mention moments and lines from this episode for paragraph upon paragraph.

I’m not going to do that, though. Instead, I’m just going to suggest watching “Homer vs. the 18th Amendment” at some point this week. Maybe you don’t want to get plastered this weekend, but you can watch the denizens of Springfield do it and get a ton of laughs without the hangover.

It’s been a roller-coaster of a ride with the Showtime revival series Dexter: New Blood. …