The Most Iconic Movie Soundtracks of the 20th Century

The Hunt is a movie surrounded by controversy.  Originally supposed to be released in October of 2019, the film was delayed because of its subject matter and tragic events that occurred in America around the same time.  It was an unprecedented by move by Universal Studios and Blumhouse Productions to pull the film from its intended release date, as it felt like the studios gave in to social peer pressure.  This was a major talking point for the remainder of 2019 and made everyone wonder if the film would ever be released.

But earlier this year, Universal and Blumhouse announced that they were finally releasing The Hunt and anticipation was high.  A film that got pulled for its controversial subject matter is finally hitting the big screen.  There was also a really creative marketing campaign focusing in on the negative press the film received even before anyone had seen it.

So was all the hype and controversy worth it?  Definitely not.  Though there are a lot of interesting ideas and some thrilling sequences, the confusing, hyper-political messaging gets away from the film and last half of the film sputters to its conclusion.

Twelve strangers wake up in a field, unaware of how they got there or why they are there.  They quickly realize that they are part of a sadistic game and being hunted by other humans.  But who are these humans and why are they doing this?  That is what they are trying to find out while trying to survive. 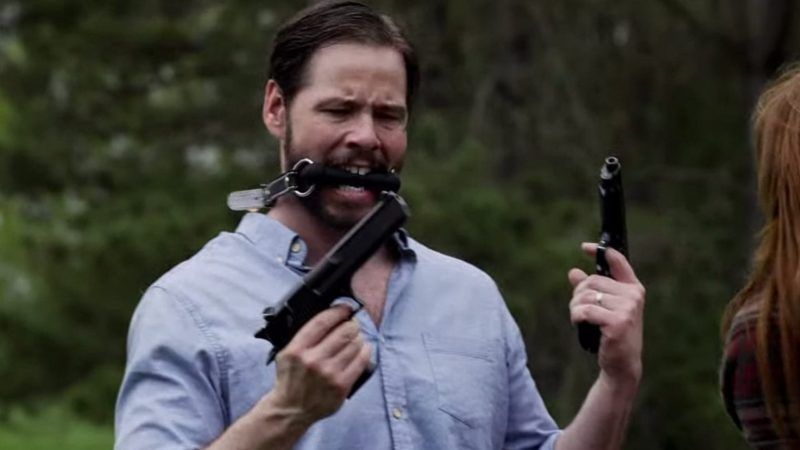 The Hunt is a movie with a very interesting premise.  This is a film that starts out with people waking up in an undisclosed location, unaware how or why the got there, which is always interesting to watch.  These kind of scenarios are always interesting in movies because we get to see the dynamic of the characters unfold and watch as they figure out what is going on as we figure it out too.  Though the endings might not always lead to where we want them to go, the journey is always an interesting one and we usually get a few good performances here and there.

But The Hunt doesn’t want to be that movie.  The Hunt has other ideas that unfortunately get way too big and too messy.  Written by Nick Cuse and Damon Lindelof, The Hunt wants to give a giant middle finger to the current political climate we face in America.  The film looks at the insanity of upper class liberals and poke fun at gun-toting, far-right conservatives but doesn’t seem to prefer one over the other.  So what is The Hunt trying to say?  Is this a movie that is pro-liberal or pro-conservative?  Well, neither.  Is The Hunt a movie showing how bad our political system has gotten?  The political subtext is all over the screen, yet so is the confusion, which is what ultimately hurts The Hunt in the end.

But even through its confusing political subtext, The Hunt does have a lot to like.  Director Craig Zobel adds enough style and flare to make this movie fun and exciting with some truly great set pieces.  The opening hunt is a bloody, shocking scene that had me on the edge of my seat and my mind racing in a million directions and the film ends with a one-on-one domesticated fist fight that reminded me of the opening fight scene in Kill Bill Vol. 1.  We also get a spectacular, badass performance from Betty Gilpin.  She plays a character who is very methodical in her actions, yet shows she has a set of skills that get crazier and more impressive as the movie goes on.  Her character is layered, yet she never shows her cards.  She also has a scowl that only rivals that of Ice Cube.  It’s a great performance and one that really elevates The Hunt during its slower times.

The Hunt could have been a great movie.  The general premise was great and Zobel is a good enough director to make this movie function.  However, the overly confusing political subtext really bogs down all that is great about the film.  If the message had been a little more subtle and not as confusing, we could have had a truly special film here.  Instead, we have a movie that’s controversy is more impressive than the actual product.

Previous EVERYONE YOU KNOW RELEASE NEW SINGLE “SEEN IT ALL” ALONG WITH THE MUSIC VIDEO
Next MOVIE REVIEW: Bloodshot