The Oscars is a show and not a reward ceremony

Classic Elvis Presley Documentary – “Elvis: That’s the Way It Is” – Swivels Its Hips Back into Theaters

As with some of Bambach other films, “MARRIAGE STORY” is long on talk and short on cinema. While most are at least a good watch, this one tricks you into thinking you’re getting a marriage story for the first five minutes, but it’s got a little trick up it’s sleeve and you soon find out that what you almost fell for, is nothing of the sort. With its sorta jokey NY/LA rivalry theme, and in certain LA frames giving us the “Annie Hall” feels, (along with other films in the same vein appear to be evoked here) but the mere mention of these kinds films only highlights the weakness of this one.

There is however, some passing enjoyment to be had.  Laura Dern turns in a stellar performance as Nora Fanshaw, a vicious divorce lawyer camouflaged in California nuances, and there are some fine cameos from Ray Liotta as Jay, opposing lawyer to Dern’s character.  Alan Alda also steps in as Bert Spitz, and is probably the best bit of comedy the film is given, though we are also given a true moment of sadness when you can’t help but notice the wonderful Mr. Alda’s tremors/shaking during this performance.  The wonderful Wallace Shawn, Merritt Weaver as Nicole’s sister Cassie, her mother Sandra (Julie Haggerty) are fun as well.  On the other hand, our two leads: Nicole & Charlie (Scarlett Johansson and Adam Driver respectively), are as bland and uninteresting to watch as is paint drying. With such a lack of chemistry the film soon grinds to a plod and therein leaves us with absolutely no feeling towards them – no matter how much they talk about it, it’s hard to fathom that they have any kind of shared history (even their son, used as a bargaining chip throughout the messy divorce, has about as much appeal as a potato).

During one particularly lengthy argument, which was right on the level with that of a Real Housewives scenario and about as well acted as such, Johannson tries, but can’t strike a spark from herself nor her co-star, the dead-eyed and apparently sedated Driver. I’ll admit, his appeal escapes me, but he can sing — as at one point he inexplicably gets to sing an entire number from “Company” at a piano bar, and pulls it off admirably well. But Baumbach remains firmly within his context setting of affluent, if not wealthy, Brooklyn and L.A. showbiz people and their neuroses. It’s all very narcissistic and more than a little contrived — as it could be said, this is more theatre, with its elaborate, paced plotting intended as build-up to the leads’ Big Scene, which then leaves us no great effect.

In fact, Bambauch makes an unforced error in a courtroom scene where, for the first time, ordinary and everyday people are seen waiting their turn before a judge, who makes a welcome comment to the effect that he is adjourning the case around which the film revolves as there are plenty of people with far fewer resources awaiting their turn. Indeed. And so the inevitable question arises: why should we care about these particular privileged, undoubtedly smart, but politically and socially dull people as they go through the predictable phases in the break-up of a marriage whose reality was never very convincing to begin with? Why should we spend our time watching what amounts to a modernized version of a drawing-room comedy, updated to take account certain contemporary sensibilities. Well that’s for someone else to figure out. The sheer fact that they list this as a ‘comedy’ is truly baffling as our leads provide none of it and if it weren’t for some great supporting roles here, this film would be a complete sham. It also should really be titled ‘Divorce Story’ as the ‘Marriage Story’ title invokes a much happier tune than what is given. 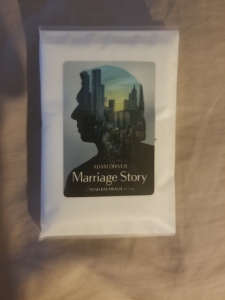 This movie is no joy ride and I tend to say that it should have been 30min shorter. Especially the musical scenes in the end felt like “to much”. Sure, I get it, it’s a reference to the Broadway theme, but it just felt out of place. Maybe this movie is a bit to long by design, to make you feel the dread and despair as a divorce, especially when it gets so dirty, is a process that goes on for much longer than you think it should. They gave us a cute little package of tissues upon entry of the film and I thought I would be using them in an emotional tense, instead the only tears to be shed were the ones of wanting the movie to just end.

In the end, this film is overlong, over shouty and brings absolutely nothing new to the table. I think I’ll watch “Annie Hall” again, thanks.

“MARRIAGE STORY NOW OUT IN SELECT THEATERS // ON NETFLIX DECEMBER 6, 2019

We Now Have A Trend Of Weird Best Actor Winners