Out-of-costume superheroes – who is the best dressed?

What You Should Know About Repo Car Auctions

A kick-ass ensemble is one of the first things that comes to mind when we think of superheroes. Usually made from body-hugging latex, bold colours and featuring their memorable icon, the costume of a superhero can be the making of them. But, when they’re not saving the world or fighting their archnemesis, who still has swagger? Read on for our rundown of the most stylish superheroes:

Opting for a more rugged look, Daredevil (also known as Matthew Michael Murdock), is a seriously stylish superhero. Similar to superhero style icons Batman and Iron Man, he’s a fan of a three-piece suit when he’s not out fighting the bad guys.

He tends to play it cool with muted tones and the occasional sharp suit. Costume designer Stephanie Maslansky explained that this is because since he cannot see his clothes, he needs to know that whatever he pulls out of the wardrobe will pair well together. She also revealed that the majority of his suits came from designer Paul Smith, as these had the best fit for Daredevil.

Murdock is known to mix things up a bit with his shirts though. He sports textured Oxford cloth button down shirts, which gives him a more ruffled look compared to those billionaire superheroes such as Tony Stark. His oval sunglasses finish off every look with a touch of style too.

Of course, the wealthiest man in Gotham, Bruce Wayne would make an appearance on this list eventually. He adopts more of a reserved style and he isn’t one for flashy suits or garish outfits. But there’s no denying that he knows how to dress.

In the 2008 film, The Dark Knight, his playboy persona became evident when he donned a Giorgio Armani suit. The suit designer reveals that by wearing a made-to-measure suit like this, Wayne can demonstrate his status as a “discriminating and sophisticated connoisseur of fine fashion, while also showing he has individual taste.”

The tones in his iconic batsuit such as charcoal greys and midnight blues are regularly reflected in his attire. These keep him looking suave and stylish when he’s off-duty. Similar to Murdock, Wayne is partial to a pair of mysterious sunglasses. He opts for wayfarer sunglasses instead, which match well with his conservative image.

Off-duty, she is effortlessly office chic, with classic feminine vibes. In 2014’s Captain America sequel, Romanoff opts for a sleek leather blazer to run her off-duty errands. Paired with black pants and knee-high boots she still brings a powerful demeanour even without carrying out any of her complex manoeuvres.

She is no stranger to a timeless pencil skirt and stiletto pumps combination, and she pulls it off better than any other of our fictional heroines. She knows how to colour co-ordinate too. Take her meeting with Captain American and Pepper Potts in Monaco in Iron Man 2. Romanoff shows up wearing a fitted red dress and red lips — both of which complement her glossy red hair. 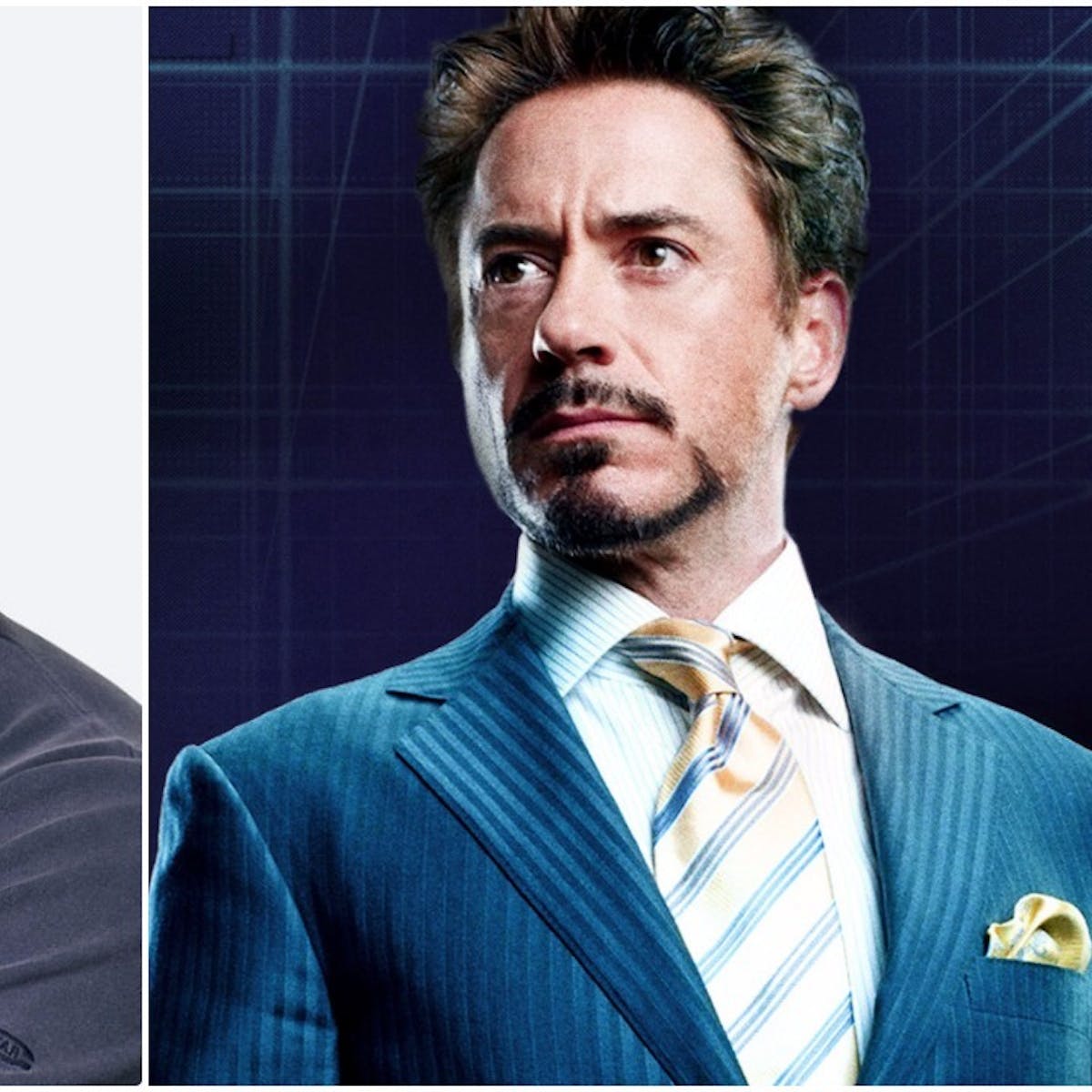 Nobody pulls off a navy suit like Tony Stark does, a.k.a Iron Man, the undisputed king of superhero tailoring.

Just like Bruce Wayne, Tony Stark likes to keep the colour of his costume in his other outfit choices— red. He’s been spotted creating a bold contrast with dark suit jackets and red dress shirt, showing that he’s confident in what he wears and conveying power with the bold tone.

He is no stranger to flashy accessorises either. From expensive watches and smart inventions to loud sunglasses he likes to spend his cash on items other than clothing. His sunglasses of choice seem to be low tinted aviators, and he’s been seen wearing red, brown, and violet coloured lenses — not your traditional wayfarer styles!

Pinstripes and pristine grooming habits keep him looking suave. Take his grey pinstripe suit that he wears before a Senate hearing in Iron Man 2 for example. Of course, Stark pairs it with a chunky yellow tie — he’s not one to be plain!

When he loses the trademark suit, you’ll see him kicking back in a vintage tee — looking as cool as ever!

T’Challa, or Black Panther, stands out from everyone in the imagined land of Wakanda. His looks are based on tradition and that’s why he is a bold figure in the epic blockbuster.

The designer behind his string of eye-catching ensembles is Ruth E. Carter. She said that she based T’Challa’s look on 18th century designs, complete with embroidered panels which resemble a Nigerian style.

As a king and a military leader, his wardrobe demanded variety. Take the first time he is spotted on the throne for example, his black and grey embroidered jacket stands out from the rest of his look and sets the tone for his fashion sense throughout the rest of the film. In another scene, he wears a white embroidered tunic, crafted with patterns that represent cultures from around the world — something truly unique!

His refined appearance doesn’t go down well with everyone in the kingdom though. Even his sister Shuri mocks his sandals in the film, but in reality, they were modified Alexander McQueen shoes!

The fitted black-on-black suit and colourful print silk scarf that he can be seen in throughout the final scenes was a notable piece – a prominent tribute to the beauty of black people. This scarf was designed by Wale Oyéjidé who named the piece “From Wakanda, With Love’.

From dynamic scarves to understated suits and lots of latex, our superheroes certainly know how to dress when they’re not in costume.

Head Honcho, Editor in Chief and writer here on VENTS. I don't like walking on the beach, but I love playing the guitar and geeking out about music. I am also a movie maniac and 6 hours sleeper.
@rjfrometa
Previous PREMIERE: LA-Based Blame Baby Releases Debut Single “Headcase” Featuring Jesse Johnson
Next Gifts for Police Officers: 11 Amazing Ideas to Show Appreciation

The Most Popular Marijuana Products in America

So far, 18 states and Washington D.C. have legalized recreational marijuana. Not to mention, the …