‘Angelyne’ Is Another Example Of Miniseries Bloat

You are going to hear a lot of people complaining about the Game of Thrones finale for a while. However, you are going to hear very few complaints about the season two finale of HBO’s Barry. That’s not just because less people watched it, though that is certainly true. It’s because Bill Hader and Alec Berg knocked it out of the park not just with the final, brutal, unsparing episode of the second season, but on the season as a whole.

“Bill Hader is a hitman who takes an acting class” reads like a silly premise, mostly because we remember Hader from many goofy roles. You imagine Stefon covering his mouth as Hader laughs on SNL. Barry has a lot on its mind, though. It can be silly, extremely so, even in its violence. In an instantly iconic episode of TV earlier this season, Barry finds himself in knockdown, drag-out fights with a middle-aged stoner who also happens to be a tae kwan do champion, and also his semi-feral daughter. And yet there’s a slapstick aspect to it.

There is human in the season two finale, but less than in most episodes. We are reminded that, at its core, this is a show about a guy who used to be a hitman. He knows how to kill people. He’s an expert with a gun. And nobody how much Barry talks about changing, when push comes to shove he turns to violence. That was true at the end of the first season, when Barry kills a police detective, and the girlfriend of his acting mentor Gene Cousineau, to avoid paying for his crimes. It’s even more true in the finale here.

Thanks to the manipulation of Barry’s mentor Fuches, oozing menace due to a bravura performance by Stephen Root, Gene (Henry Winkler showing us he is so much more than a sitcom star) ends up taking the fall for his girlfriend’s death. This infuriates Barry, and when Barry is furious, bad things go down. 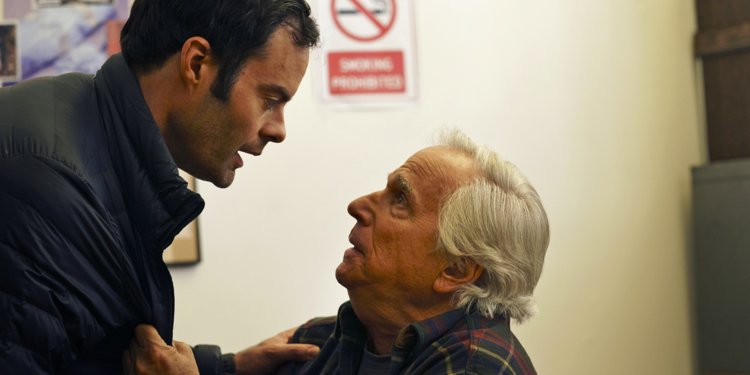 I’m not here to recap all the action of the show, and if you are reading this you probably know what happened. With all the assorted gangs from the show joined together at their monastery hideout, along with Fuches, Barry finds out that his former mentor is hanging out there looking for protection. At this point, Barry, the man who desperately wanted to believe he can change, who talked a big game of leaving violence behind him, snaps. He becomes the man who killed innocent people in the war because he thought they killed his friend.

There is no humor in the monastery shootout. There is great direction, but nothing funny. We just watch Barry kill everybody in his way to try and get to Fuches. It’s bloody, it’s brutal, and it’s a man out of control. He doesn’t kill Fuches, but he does kill many of NoHo Hank’s Chechnyan foot soldiers, even the one man in the group who should real promise. In the face of his mentor, he freezes up, and Barry kills him without remorse.

People have a strange habit of rooting for the protagonist of any show they are watching, even if they really shouldn’t. For some reason, people loved Walter White. They wanted him to get away with his machinations, they’d get angry at his wife for being upset with him. It’s a weird impulse. At times, the people behind Barry teased the potential for sympathy for Barry Berkman. That all went out the window in this episode. He’s still a brutal killing machine. Maybe Gene Cousineau is right and people can change, but maybe Barry can’t. Or, more chillingly, maybe he simply doesn’t want to.