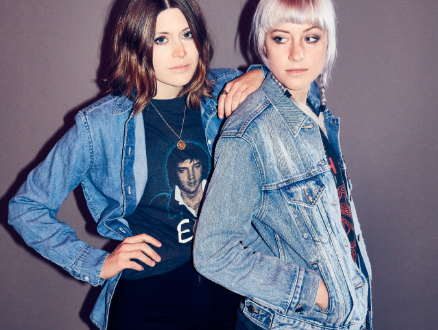 As Nashville-based LARKIN POE prepare for the release of their new album VENOM & FAITH, the sister duo have premieres occurring on both sides of the Atlantic. FLOOD Magazine premieres the new music video for the song “Bleach Blonde Bottle Blues“and Americana UK debuts the new track “Sometimes.” Venom & Faith gets released via Tricki-Woo Records on November 9, 2018. “Sometimes” is out now and can be streamed here.

The duo told FLOOD that “’Bleach Blonde Bottle Blues’ was so late in coming into creation that it almost didn’t make it onto the record! It was such a fun lyrical jigsaw to piece together: this rhythmic picture of a bombastic, larger-than-life woman.” On the topic of the video itself, the sisters explained their choice to shoot the video in Nashville, saying “We wanted to invoke the feel of a gritty American South with kudzu, chain link fences, and attitude.”

In a genre as storied as American roots and soul, Larkin Poe are poised to make a mark all their own with  Venom & Faith. Rather than rest on their laurels, Larkin Poe persist and emerge rattling, stomping, and sliding into a modern-day depiction of what roots rock should sound like… writing another chapter in an everlasting story. “It’s a celebration of American roots music as translated by two sisters who are playing the blues in a modern age,” says Rebecca Lovell about their new album.

As the follow-up to their critically-acclaimed second album Peach, which was nominated for aBlues Music Award for Best Emerging Artist Album, Venom & Faith was produced by both the band and their long-time engineer Roger Alan Nichols. Those who pre-order the record will receive “Bleach Blonde Bottle Blues,” Sometimes,” and “Ain’t Gonna Cry” as an instant free download.

Recorded in Nashville earlier this year in between headline shows, festival dates such as Bonnaroo and Lollapalooza, and a featured guest performer spot on Keith Urban’sGraffiti U World Tour, Larkin Poe approached Venom & Faith with fierce independence. From Rebecca’s powerful vocals on “Ain’t Gonna Cry” to Megan’s sultry lap steel on “Good And Gone,” the sisters weave their talents into the fabric of their experience and a picture of the American South. “Blue Ridge Mountains” harkens to the sisters’ hometown, “drinking sweet tea every day” with stomping percussion and churning riffs.

Venom & Faith will be released via Tricki-Woo Records on November 9, 2018. Album pre-orders and pre-saves on Spotify, iTunes and other digital retailers are available here: https://larkinpoe.lnk.to/Sometimes

Head Honcho, Editor in Chief and writer here on VENTS. I don't like walking on the beach, but I love playing the guitar and geeking out about music. I am also a movie maniac and 6 hours sleeper.
@rjfrometa
Previous Talib Kweli, NIKO IS, Schoolly D Star in Colors of The Culture Crew’s Fourth Episode “Tamahmgiso”
Next Tritonal Announce New Studio Album “U & ME” and North American Tour