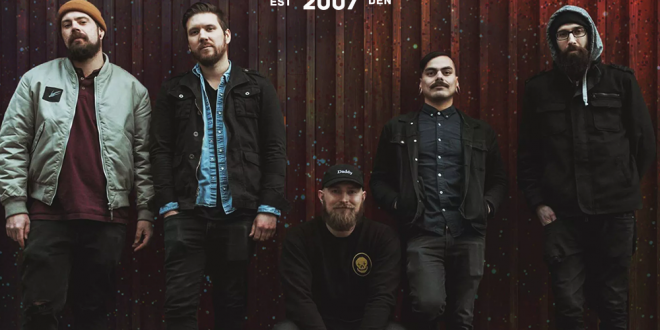 Keeping wup with our premiere week, we are teaming up with a band that makes justice to its name as My Body Sings Electric returns with their infectious and electriying new single “Blame.”

My Body Sings Electric has spent more than a decade tirelessly building a following for their playfully honest blend of indie, alternative and post-hardcore rock. The band is prepared to release their most ambitious work yet with a new album slated for 2018 mixed and produced by Jason Livermore – Rise Against, A Day To Remember.

The band has amassed a list of impressive dates on tour with Andrew McMahon in the Wilderness, Nick Thomas of The Spill Canvas, The Hush Sound and arena dates opening for Imagine Dragons, Young the Giant, Grouplove, and Bastille and more.

Hi guys, welcome to VENTS! How have you been?

Sweating profusely in a hot garage all summer in this ridiculous heat. Thanks a lot Al Gore.

Can you talk to us more about your latest single “Blame”?

It’s the first single from our new record, and the first song we’ve dropped in well over a year. The song is about a toxic relationship where two people are stuck in a pattern of blowing up at each other over trivial differences.

Did any event in particular inspired you to write this song?

I think we’ve all either been through this kind of relationship or have seen a similar situation play out between close friends.

Any plans to release a video for the single?

Absolutely! We’re wrapping up the final cut for the music video and it will be out very soon.

Our whole world got flipped upside down when our former drummer left, and as a result we have approached writing and recording from an entirely new angle for this record. It’s been a breath of fresh air.

Previously, we had drifted off into writing in silos or demoing with computer drums and when our new drummer, Justin, came into the picture he was really energized to get everyone into a room together for writing. It helped us get back to the best part of being in a band — being in a room with your friends and making things.

We visited The Blasting Room last October where we cranked out drums and bass for this record with Jason Livermore’s assistant Chris Beeble — who is a very talented and good-looking man. Our singer, Brandon, has really pushed himself to become a better recording engineer and producer in the past few years, so he took on all of the duty for recording guitars and vocals for the record. It helped us save on recording costs, but also gave us the time we wanted to craft a cohesive full-length album.

What was it like to work with Jason Livermore and how did that relationship develop?

We’ve spent quite a bit of time recording at Jason Livermore’s studio, The Blasting Room. We worked with him as a producer and mix engineer on Part 1: The Night Ends, and he was so amazing that we just had to work with him again for mixing on this release. That studio feels like a second home to MBSE because we’ve recorded the majority of our music there.

How much did he get to influence the album?

Jason really is a brilliant mind when it comes to the production end of things. We were working at a feverish 14-hour-a-day pace in the weeks leading up to the mixing stage, and it felt amazing to get it out of our hands and let him do his thing with it.

What role does Denver play in your writing?

It’s hard to say whether Denver influences our actual writing process or lyrics, but the music scene definitely has a big effect on motivating and inspiring us. It seems like every year a new Denver group hits lightning and moves on to bigger things, but when you take a look around the scene you quickly realize there are 12 bands that could easily be the next to blow up.

Known for playing with different genres – how do you get to balance them together?

We have a really adventurous aspect to our music that makes us want to explore strange sounds, grooves or time signatures — but we’ve spent so many years banging our heads against walls trying to make a 10/8 groove sound like a pop-rock song that we know when we’re overcomplicating things. Most of our writing process is comprised of weeding out the bad ideas to get down to the core of what makes a part good.

How’s your new album coming along?

We are all wrapped up with the record. Now we’re sorting out the details to properly release it and get the music the attention we think it deserves.

Any tentative release date or title in mind?

The title is “What It Means to be Afraid” but we don’t have a release date set.

We’ll be planning tours as we get closer to nailing down a release date.

What else is happening next in My Body Sings Electric’s world?

All I can say is it’s going to be a fun year. Thanks for talking with us!

Head Honcho, Editor in Chief and writer here on VENTS. I don't like walking on the beach, but I love playing the guitar and geeking out about music. I am also a movie maniac and 6 hours sleeper.
@rjfrometa
Previous Drunken Masters Present The “Places” Collection
Next Secret Rendezvous Release For Real. (The Remixes)