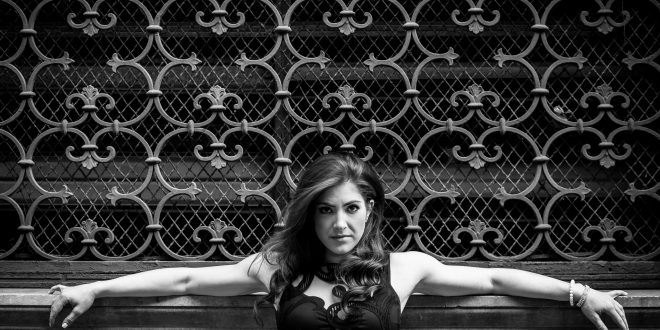 Kicking off our premiere Tuesday, we are changing the mood a bit as we team up with KayBe for the exclusive premiere of her new music video for “Too Close.” The video is as stripped down and intimate as the song, featuring the LA based artist as she dreamwalk through a beautiful landscape.

From an age earlier than she can remember, KayBe has been singing her heart out and is ready to take on the world with her upcoming, self-written and produced, full-length album, “Lovesongs.”

Anyone anywhere anytime could be doing anything, but the spunky, brunette belle, KayBe is probably “writing, singing, playing, and falling in lovesongs.” And she sings just those lyrics on the title track of her upcoming, self-written and produced, full-length album, “Lovesongs.”  The St. Louis to Nashville to now Los Angeles based songstress has undeniably returned to the music scene with her most cutting-edge music to date.

From an age earlier than she can remember, KayBe has been singing her heart out.  “I distinctly remember being in San Antonio as a little girl in the living room of my Great-Grandmother, and I could smell the fresh baked Oatmeal Raisin cookies coming through the house.  My younger brother sat on one edge of the room freely scarfing them down one after the other and I stood on the other end of the room preparing to sing ‘My Bonnie Lies Over the Ocean;’ my payment for the cookies. But I totally loved it and Oatmeal Raisins are the best.”

KayBe was born and raised on Country music learning to sing “Blue” by LeAnn Rimes and studying the songwriting craft through Shania Twain.  She loved listening to her mom’s Celine Dion, Whitney Houston and Michael Jackson CDs and belting hymns from church on Sunday morning.  KayBe started playing the piano in her early childhood which is where she first learned to love classical music and was an intensive dancer for 12 years where she fell in love with feeling the thick bass and beat move through her body.  When she was around 16 years old KayBe began to weave all of her motley influences into her own distinctive sound.  KayBe’s refined vocal tone influenced by the divas of pop and women of country singing atop classically inspired piano motifs and body-shaking pop percussion creates a sound you must hear to believe.

KayBe has travelled across the country to pursue her dream as a musical artist and songwriter.  She studied Vocal Performance at Belmont University in Nashville, TN and has since continued her career in the big city of LA.  KayBe previously released a self-written EP entitled, “Wax.” in early 2015 produced by the up and coming Dane Diamond and has released a single titled “Murderer” following that.  KayBe often plays live around the city of Los Angeles accompanying herself with her 80lb keyboard that she drags around and lifts in her high heels.

But perhaps the most exciting news for fans of KayBe and those who have yet to discover her is that she has been hard at work and is set to release an entire, full-length self-produced and written album in 2018.  “I have never been so proud of any of my finished products and I am so excited to share the most authentic and real piece of me to date.  I have taken everything I have learned and lived and put it into this piece of work,” she says.

Previously, years ago KayBe was diagnosed with Pertussis, more commonly known as “The Whooping Cough,” and it took a grim toll on her vocal chords.  Having a cough like that can damage your voice for years if not permanently and KayBe struggled through High School and College working hard to care for and rediscover her voice.  In the past year and a half KayBe feels like she finally has her full voice and her full range again and is thrilled to finally have been able to utilize her voice at its fullest potential.  While she continues to grow and aim to improve, she takes this experience as her mantra and reminder to never give up!

KayBe has redefined class and grace and stands alone as an artist unlike any other of her time staying true to the core values and virtues of her upbringing on and off the stage.  KayBe consistently delivers timeless songs with a magnetic energy and authentic ideas with a fresh style that encapsulates rhythm and blues, a touch of 80s pop and melodies that won’t stop.  KayBe has evolved from a celebrated vocalist to an award-winning songwriter and now a cutting-edge producer.  Her effortless knack at songwriting seamlessly pairs playful, sweet-sounding melodies with cleverly intrinsic lyrics.  The raw juxtaposition of her pure, but sultry voice tells stories with a sparkling dialogue and unmatched fervor.  KayBe’s music takes the best elements from each genre and strategically intertwines unlikely cohesive pieces to create a fresh, new, and innovative sound that has yet to enter the music scene.

“I honestly can never remember ever wanting to do anything else with my life,” KayBe shares.  “I’ve never even considered any other options, because I knew this was something that I was supposed to do… I had to do.  We are all given a gift to utilize and glorify God’s name… I get to sing stories.”

Head Honcho, Editor in Chief and writer here on VENTS. I don't like walking on the beach, but I love playing the guitar and geeking out about music. I am also a movie maniac and 6 hours sleeper.
@rjfrometa
Previous THE DOLLYROTS TO HIT THE ROAD ON THE “RAH! RAH! RADICAL TOUR”
Next Casino Etiquette: What Should You Know Sitting at the Poker Table