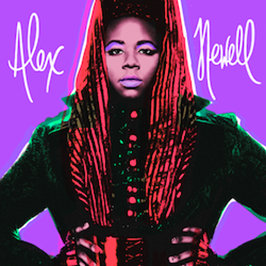 “POWER” is preceded by the extraordinary new track, “This Ain’t Over,” which premiered yesterday, January 14th, via SPIN.com. The track is on sale NOW at all DSPs (smarturl.it/PowerEP) and available to stream here: smarturl.it/StreamThisAintOver.

Best known for his co-starring role on Fox’s hit series, Glee, Newell will support “POWER” with an eagerly awaited US concert tour. The multi-talented performer will accompany Adam Lambert as special guest beginning February 23rd at The Paramount in Huntington, NY and then continuing through an April 2nd finale at Los Angeles’ Orpheum Theatre.

“POWER” is marked by Newell’s playful yet potent approach to disco-injected dance-pop. Throughout the process of making the EP, the gifted 23-year old entertainer was able to collaborate with some of pop’s most honored artists, including Nile Rodgers (Chic, David Bowie), GRAMMY® Award-winning songwriter Diane Warren (Whitney Houston, Aerosmith), MNEK (Beyoncé and  Zara Lawson), and superstar DJ Cassidy.

Alex Newell quickly went from Massachusetts high school student to a beloved star on one of television’s most popular and influential series. His 2011 self-taped audition earned him over one million MySpace views as well as a spot on the first season of Oxygen’s The Glee Project. The gifted young performer proved an undeniable star and ultimately, the hit competition series’ first runner-up. Initially cast on Glee for just a two-episode arc, Newell proved an immediate fan favorite with his dynamic performance as Wade “Unique” Adams and was soon elevated to the main cast. The groundbreaking role highlights Newell’s remarkably diverse talent, allowing him to shine as both the shy, outcast Wade and his bold, brave alter ego, Unique. With his powerhouse vocalizing, versatile acting, and undeniable magnetism, Newell has earned widespread critical acclaim, a loyal fan following, and, along with his fellow Glee cast members, a Screen Actors Guild Award nomination for “Outstanding Performance By An Ensemble In A Comedy Series.”

Having conquered television, Newell’s focus returned to his first love: music. 2014 saw the release of his debut single, a magnetic cover of Sigma’s “Nobody to Love,” which topped the Spotify Viral Chart in December 2015. This was quickly followed by featured appearances on GRAMMY®-winning dance outfit Clean Bandit’s smash “Stronger“ and The Knocks’ dazzling 2015 single, “Collect My Love.” Newell also teamed with UK-based deep house duo Blonde on the chart-topping “All Cried Out (Feat. Alex Newell),” which is certified Gold in the UK, – taking #1 on the British dance chart while also reaching the top 5 on the overall tally on its way.

Newell also partnered with Moscow-based DJ/producer Matvey Emerson for a scintillating cover of Robin S.’s house classic, “Show Me Love,” earning ecstatic acclaim from MTV.com: “Alex’s talent hearken back to the masters of the genre — Robin S., CeCe Peniston, Martha Wash — in a way I haven’t quite heard in this wave of house revival. It takes a certain kind of vocal excellence to produce ballad-level vocals over a frenetic dance beat, and Newell has totally got it.”

As if that weren’t enough, Newell is a committed social activist, whose philanthropic work includes support for the American Cancer Society. Moreover, he is a proud role model and inspiration to LGBT teens around the world. His strong stance and passionate efforts have landed him coveted performances at the 2015 OUT 100 Gala and the White House’s Champions of Change event.

Head Honcho, Editor in Chief and writer here on VENTS. I don't like walking on the beach, but I love playing the guitar and geeking out about music. I am also a movie maniac and 6 hours sleeper.
@rjfrometa
Previous Santigold Release New Music Video For “Chasing Shadows”
Next ATLANTIC AND WBR TO RELEASE HBO VINYL SOUNDTRACK